We've all seen the more recent viral videos of people tromping around on their tip toes with the song "My Boo" (Ghost Town DJs) being played simultaneously in the background. These videos have gone viral for the past month or so and are always tagged on Facebook, Twitter, Instagram, and other social media platforms as #RunningManChallenge. While filming my sister's wedding this past weekend, my family decided it would be a good time as ever to break out the cameras and film our own version: the #RunningBearChallenge.

Seriously though... What's with the bear?!

Way back in the day, my younger brother Dan was going to be the ring bearer for my cousin's wedding. When he asked me what that meant exactly, I being the wise and honest older brother I was told him the truth: you will be wearing a bear costume as you walk down the isle to give the bride and groom the rings. Hence the title "Ring Bear".

Like it should, this of course became a running joke throughout the years. I pried and pleaded my wife to allow our wedding to contain a "Ring Bear" but to no avail. Surprisingly to all of us, my sister decided to pull the trigger on the idea and asked my youngest brother to be the first ever "Ring Bear" for her wedding. We were all thrilled.

I will post the wedding video when it is available! 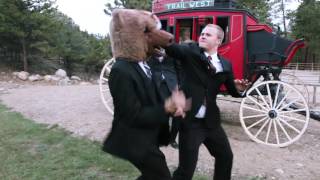